Formula 1 Proposed Regulation Changes and Their Impact on Viewers Experience

Formula 1 is all about constant evolution. While each team’s vehicles are unveiled during winter testing in February, by the end of the season they will all nearly be completely different vehicles than what they started as.

These changes come about naturally as each team looks to increase their performance throughout the season, and also as a result of some regulations and loopholes being tightened to stop individual teams gaining too much of an advantage (or not following the ‘spirit’ of the rules).

For 2021, the FIA (Federation Internationale de l’Automobile) is proposing a new set of governing rules which will completely redefine what the current Formula 1 cars look and perform like.

The last time a major rule change such as this occurred was in 2014, when the hybrid V6 powertrains were introduced. The ‘Hybrid Era’ (as it became known), has since been remembered mostly by the dominance of Mercedes and Ferrari, the decline of several historically important teams such as Williams and McLaren, and the lack of close and truly exciting racing.

There were several purposes to the 2014 rule change, with the primary one being to improve the racing spectacle for the audience by facilitating more overtaking, closer racing and more strategy implementation. The KERS (Kinetic Energy Recovery System) and DRS (Drag Reduction System) introduced in 2011 remained, in order to help promote overtaking and the ability for cars to stay close to each other. 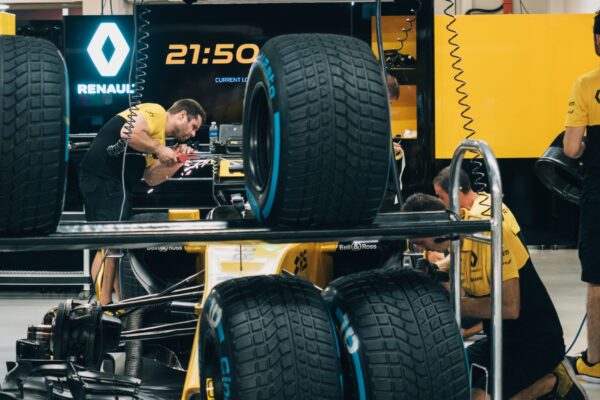 The aerodynamics of a Formula 1 car are now considered one of the most important aspects of the vehicle. The last major change in aerodynamic regulations came in 2009, with the aim to increase overtaking and close racing. While these changes primarily affected the front and rear wings, the floor and the bargeboards have also been a source of huge development due to the outlawing of true ground effect vehicles in the 80’s. From its conception, ground effect vehicles in Formula 1 have always tried to be tightly regulated due to the increased risk of accidents, as cars could instantaneously switch from high downforce to high lift when unsettled (essentially turning them into uncontrolled aircraft). The FIA has worked hard to limit teams’ floor design, so much so that the floor in current Formula 1 cars is almost entirely flat.

The problem with concentrating aerodynamic effort into the front wing, rear wing and bargeboards, is that it creates large and complex wake profiles behind the vehicles. In particular, the front wing is seen as the key to aerodynamic performance as it is the first component to meet the freestream air. 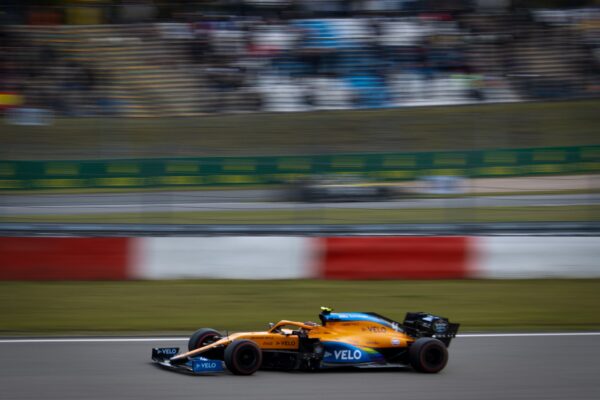 Since the 2017 front wing changes, there are two aerodynamic concepts that have been at the centre of the engineers’ attention: the Y250 vortex and outwash. Both concepts stem primarily from the design of the front wing, and their primary function is to control the wake coming from the rotating tyre.

For the air working over the vehicle to be most effective, it is desirable for it to remain attached to the surfaces it is interacting with. When the air separates from surfaces, it creates unstable turbulent flows that will reduce the overall downforce levels of the vehicle. In order to aid the airflow to stay attached to the bodywork, high energy vortices are created from the front wing to, essentially, trap the clean air between the vortex and the bodywork. As well as trapping the clean air, these vortices also protect the bodywork from the turbulent wake being produced from the tyres and push it further outboard, away from the sidepods and the rear wing. This vortex is known as the Y250 vortex and is created from the end tips of the front wing profiles. It is called the Y250 vortex because these profile tips are located 250mm from the centreline of the vehicle on either side of the front wing.

Through Computational Flow Dynamics (CFD) and data gathered from the teams during races, it was seen that this out-washed wake can cause a reduction in downforce of a following vehicle of around 40 to 50%. This drastically affects the ability of a following vehicle to stay in proximity of the vehicle ahead through corners, and it results in vehicles completely changing performance levels almost instantaneously when overtaken and when entering a corner behind another vehicle. 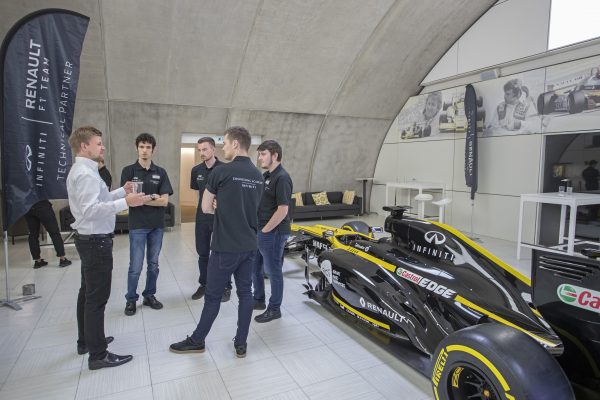 How the 2021 rules are proposing to fix these issues

The big problem for Formula 1 is how to mitigate the wake effects while being able to retain similar levels of downforce. This is crucial in enabling cars to still be as fast as spectators expect, while also allowing closer racing and more overtaking.

The 2021 regulations answer to this issue is to go back to the ground effect principle. As mentioned before, ground effect has been used in various forms throughout Formula 1, but since the 80’s it has been more and more limited due to safety concerns.

Simply put, ground effect works like an inverted aeroplane wing and, rather than allowing the vehicle to fly, it pushes it into the ground. This works primarily using the Bernoulli Effect, which shows that when a moving fluid is accelerated (air in this case), its pressure will decrease. This decrease in pressure underneath the vehicle has the same effect as sucking the air out of a plastic bottle: the pressure tries to normalise itself and, as a result, the acting volume is decreased, thus pulling the vehicle to the ground (or shrinking the plastic bottle). What is most important about this concept, particularly on Formula 1 vehicles, is that this produces a large amount of downforce for a much smaller amount of drag when compared to the front or rear wings.

Going away from the (relatively) flat floors that have been implemented for years now, the 2021 vehicles will instead utilise massive venturi vanes underneath them, which will channel air into ever decreasing volumes, thus increasing velocity and decreasing pressure as described above. These tunnels continue for much of the length of the vehicles and begin to increase their volume at the rear, creating more downforce still (through the massive pressure differentials). This increased floor length will also help to keep the downforce levels balanced across the entire vehicle, taking away some of the need to produce downforce on the front and rear wings.

Another big change can be seen in the front wing, where the wing elements will travel all the way to the nose of the vehicle (rather than ending at the neutral Y250 point). This will stop teams from churning up the high energy Y250 vortices on the inside of the wheel. 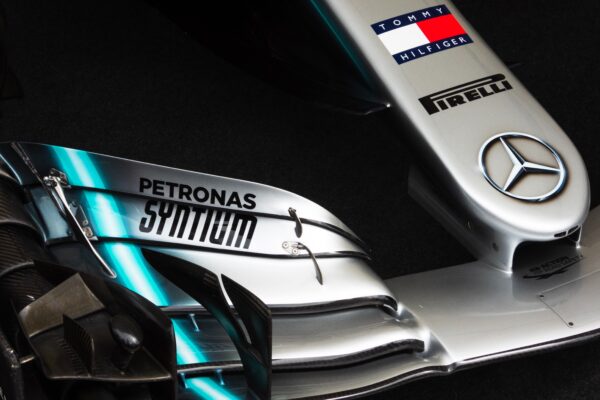 Wheel wake will still be an issue, so in order to allow teams to still control it to some degree, there will be two additional key aerodynamic devices: wheel fairings and wheel blades.

The wheel blades (located over the top of the wheels) reduce the separation and turbulence created by the lower pressure area behind the tyres, while the wheel fairings allow for a much cleaner airflow to pass around the outside of the wheel. Wheel fairings have been used in the past (most famously by Brawn Racing) and were a very effective tool, but they do have some drawbacks such as a reduced brake cooling potential.

Rear wings will also see some changes and will be taller and narrower than the current ones. They will also implement a lower beam element which will help integrate the performance of the floor tunnels and the rear wing much better. It seems for now that the DRS will remain on the rear wing in 2021 as well, to further aid overtaking.

These changes have resulted in a loss of just 5% downforce for following vehicles in CFD and wind tunnel testing conducted by the FIA. If these values hold up when the vehicles are made, the changes will indeed have a huge effect in the drivers’ ability to race against each other in a much more exciting way.

The next question is, will any of the above help teams with less money or resources be more competitive and bridge the gap that currently exists between Formula 1 and (the so-called) Formula 1.5.

In terms of the amount that teams can differentiate themselves with their aerodynamic development, it does help. These more prescriptive aerodynamic rules will allow teams with less resources to keep focused on larger development issues, rather than having to worry about microscopic changes in geometry to aid performance.

In order to allow teams to further bridge the performance gap, Formula 1 has also suggested that there will be many more spec parts for the 2021 season. The gearbox has already been confirmed as one such spec part, and it will essentially become a standard cartridge that can be inserted into each team’s rear casings. Other parts such as brake components, rims, hubs and wheel nuts have also been proposed. Interestingly, regulated hubs and wheel nuts would allow for further standardisation of some pit stop components such as wheel guns, trolley jacks, etc., taking away any potential advantage that teams may be able to squeeze out of them.

Pirelli have also suggested moving to 18 inch rims with tyres that will not degrade as quickly as the current ones. This will allow drivers to relax more on the tyre management front during a race, push the vehicle much harder, and take full advantage of the increased downforce levels when following another vehicle. The trick will be ensuring that the tyres performance doesn’t decrease too quickly while also allowing for pit stops to continue, which won’t be easy to achieve.

The suggested rule changes for 2021 do indeed answer many of the spectators’ and drivers’ complaints from the last few years. With these new rules in place, vehicles will be able to perform much better when following other cars, smaller teams will have a better chance to develop at a similar pace as much larger teams, and drivers will be able to focus more on the racing (rather than on the tyre wear, the vehicle pacing and so on). Hopefully this will result in a much larger, closer grid that is able to truly excite and surprise the spectators, race after race.