He’s has been all but unbeatable this season. Is such domination bad for the sport and sponsors?

Marc Marquez, the freshly crowned, six-time MotoGP world champion was up to his old, awesome riding tricks again this season. His otherworldly ability, unflappable focus and clockwork consistency saw him win this year’s championship with four of the full 19 races in hand. His title challengers only took the podium top step six times in 15 chances before the mighty MM93 wrapped it all up. There’s domination and then there’s Marc.

Sure, his Repsol Honda RC213V is fast, but it’s also hard to ride to the max. Unfortunately, for the rest of the MotoGP grid, max attack is what Marquez does best his bright, wide smile never fully defusing his calculating, penetrating stare. Scary stuff. 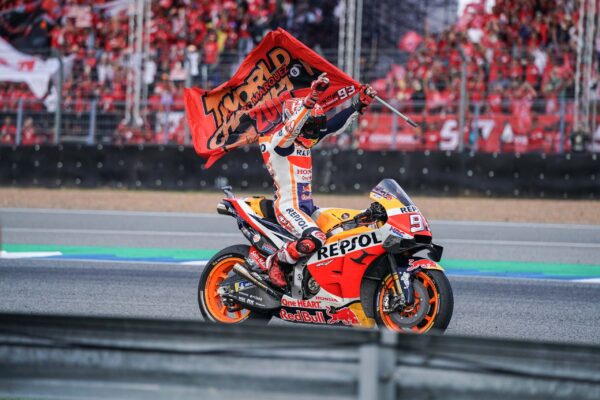 Like all sports, MotoGP has its fair share of passionate tribes around riders and teams. Yamaha’s Valentino Rossi, the greatest of all time in the modern era, is charming and likable; the Italian’s cheeky quips, silky talent and seven MotoGP titles rightly earning his GOAT status. But, at 40, he’ll surely be closing the throttle for good soon.

There’s Desmo Dovi for the Ducati team who, like this year, has run Marquez the closest for the title in recent history. As an Italian rider on an iconic Italian motorcycle brand, he’s powered by a passionate sea of fans in Ducati red, as well as race fuel. However, while Andrea Dovizioso is as fast as his brutal-looking Ducati Desmosedici GP bike, it’s Marc’s killer consistency ? never lower than second place, apart from one DNF that’s destroyed Dovi and company in 2019.

We’ve seen some great young guns bubbling up this season Fabio Quartararo, Alex Rins and Maverick Viales and while they nipped at Marc’s heals from time to time the champ invariably had the answer on any given Sunday. The frustration was clear on the other riders’ faces as they regularly trudged to the lower podium steps. But what do the fans say about it?

Marquez is a Marmite rider, for sure. This writer loves the way he wrestles his stunning prototype Honda around the track; cornering harder and power-sliding faster than the rest. I don’t really care what he’s like off-track; it’s what he can do on the bike that sees me on the edge of my sofa, not his post-race banter. I have a soft spot for Rossi who doesn’t and when Valentino’s mixing it up at the front, he’ll always get my cheers. But when the cameras track the lead action, you’ll find it’s mostly Marc’s pulsing Repsol-orange Honda pushing the advantage. Some fans simply cannot deal with this. Marc is too consistent; machine-like, and us humans perhaps connect better with sportsmen who, like us, make mistakes. Marc doesn’t really make mistakes.

What does this mean for MotoGP’s sponsors? Well, if you’re Repsol, Honda’s main MotoGP partner, you’re laughing. Marc’s wild riding style and devastating overtakes are perfect TV camera fodder, and his high action clips are just so socially shareable. Spaniard Marquez and energy company Repsol share their home country, and Honda and Repsol have been together so long that most TV commentators automatically refer to their race bike as the ‘Repsol Honda’, rather than simply the ‘Honda’. A race-winning dream team in every respect.

A bit of a nightmare for the other teams and sponsors, then? Well, they might not get the glory of as many race and championship trophies as the Honda squad, but unlike some other topflight motorsport championships, the other MotoGP pilots and machines are closely enough matched to regularly deliver entertaining scraps at the front, and further down the field. And, as the rest of the grid push still harder to get close to Marc, so the tantalising prospect of future battles energises the fans and sport. 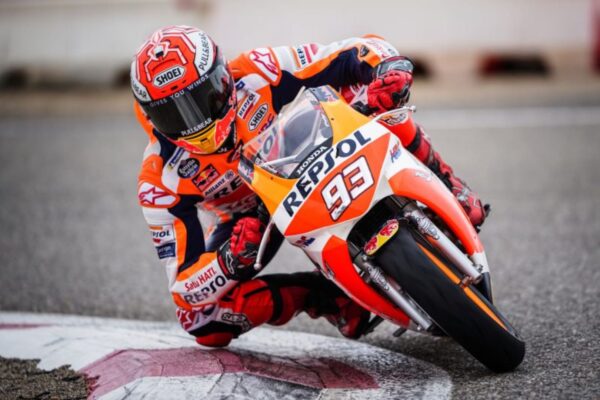 For most of the races the grandstands have been absolutely packed; throngs of fans knowing full well that they’ll be watching the fastest, most fearless men on the planet riding rocket-rapid motorcycles with all the skill, sound and spectacle that goes with it. No divisive hybrid ‘powertrains’ in MotoGP; just glorious, high-revving engines wrapped in sculpted metal and carbon fibre.

Marc might be mauling the competition right now, but there’s so much talent, ambition and technical creativity in the sport that viewing is all but compulsory for the huge global fanbase. And that’s MotoGP-music to the ears of sponsors.

You could argue that Rossi-the-GOAT has lost his bounce in recent years, so would his Twitter following be showing signs of decline too?

It seems that, in this instance, it’s not just about being the current champion personality goes a long way in MotoGP social media, too. Just like in real life.